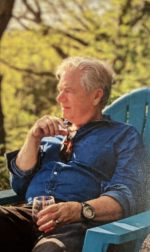 TT has said goodbye to our beloved colleague Sean O’Reilly, who died of cancer December 6 at the age of 70. As editor-at-large for Travelers’ Tales since the 1990s, Sean helped develop and edit many books, and he was instrumental in managing the annual Solas Awards for Best Travel Story of the Year from their inception in 2006. His favorite travels took him to the South Pacific, Malaysia, China, Australia, New Zealand, and all over Europe. Outside the travel writing world he wrote a number of controversial books on men’s behavior and society, including How to Manage Your D.I.C.K; Authority, Creativity and the Third Imperium; God Has Skin in the Game: How a New Understanding of Politics and the Soul Could Change America. He was also an entrepreneur with multiple enterprises in various realms: book distribution, transportation, and online sales. Sean’s humor, strength of will, and eternal pursuit of truth endure in the hearts of his family and friends. He is survived by his wife, five sons, one daughter, six siblings, and dozens of nieces, nephews, great-nieces, great-nephews, and godchildren.

We're thrilled to announce the winners of the Sixteenth Annual Solas Awards for Best Travel Story of the Year. Grand Prize winner Patrick Ritter collected $1000 and the gold award for “Boots Bilong Mi,” his outlandish tale of cultural encounter on a dugout canoe journey down Papua New Guinea’s Sepik River. Janna Brancolini won the silver award and $750 for “Honor and the Sea,” her fascinating illumination of Honor Frost’s lifetime of work in underwater archaeology. Robert Fama took the bronze award and $500 for “The Shakeout Trip,” his formative tale of traveling to Timbuktu with a companion on an unusual quest.

Find the complete list of winners and more about the Solas Awards at BestTravelWriting.com.
Winners of the 16th Annual Solas AwardsLarry Habegger2022-05-02T15:53:17-07:00

Now Available in Print and Audiobook: French Like Moi

Scott Dominic Carpenter's hilarious new book on Paris is here, and the critics are loving it. Here's what a few have to say:

“A delightful read…filled with levity and grace.” —Kirkus Reviews

“Carpenter has a knack for turning catastrophes into comedy.” —Publishers Weekly

"French Like Moi is a true original: a serious memoir that doesn’t take itself too seriously." —Marcia DeSanctis, New York Times bestselling author of 100 Places in France Every Woman Should Go

Get a print copy now! Buy the audiobook on Libro.fm.

We're pleased to announce the winners of the Fourteenth Annual Solas Awards for Best Travel Story of the Year. Grand Prize winner Erin Byrne collected $1000 and the gold award for “Our Ravaged Lady,” her powerful evocation of Notre Dame Cathedral’s symbolism for generations of the French people and for herself personally. Amanda Castleman won the silver award and $750 for “Love in a Time of Abundance,” her poignant account of vanishing cultures and our own mortality on a safari in Botswana. Tom Miller and Chase Nelson shared the bronze award and $500, Tom for his inspirational profile of the “best guitar maker in Cuba” in “Cubana Be, Cubana Bop,” and Chase for his dramatic tale of life and death and conquest en route from Machu Picchu in “Dark Train to Cusco.” Here’s the complete list of winners. Read the Grand Prize Gold winning story in our Editors' Choice section.