Get the best collection of travel stories about Greece:Travelers’ Tales Greece. See our full catalog of books.

I came in last, of course. Even though the echoes of other runners were only in my imagination, I wouldn’t want to take away any of their glory. (I’m also realistic about my foot speeed :-)

But what a thrill it was to race down the track where the Pythian Games were held nearly 2500 years ago in Delphi, and for 500 odd years after that. (The marble seats are more recent – a mere 1800 years, put in during the reign of Hadrian as part of the Roman restoration of the temple precinct. The Romans also shortened the track from the Greek stadium length of about 187 meters to about 181. So my hundred yard dash left me far short of the finish!) 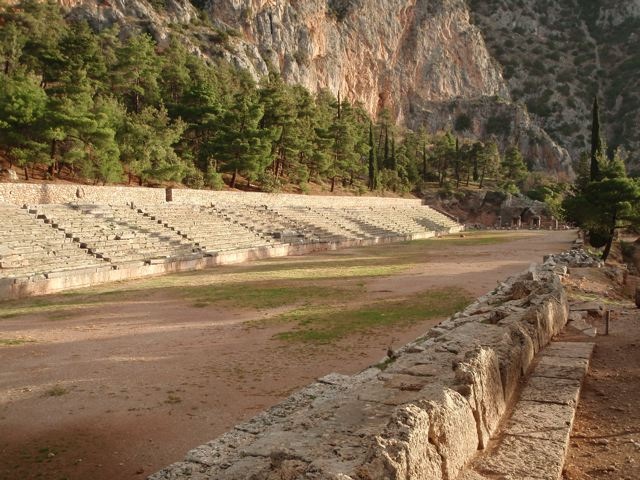 It was very early in the morning, no one was around, and I could jump the rope and enter the stadium rather than just looking from the outside.

I took the opportunity to catch not only the solitude but the amazing light just past sunrise.

Delphi is truly astonishing, both in the beauty of the natural setting and the placement of the ruins within that setting. I’ll try to give you a sense of that in pictures.

Here’s the view from the Hotel Amalia, where we are staying, looking down from the heights into the Gulf of Corinth. This is what I saw when I walked out the door at 7:20, on my way a mile down the road to the Temple precinct. 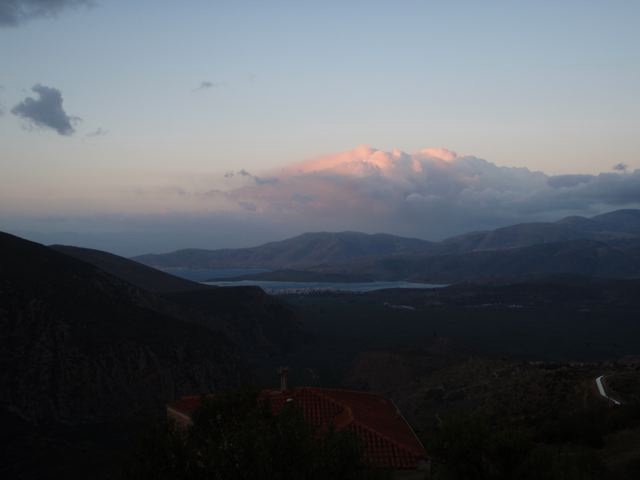 The view from the porch of our room is not quite this good, as it’s partially obscured by trees. If you ever stay here, look for rooms on higher floors (we’re in Room 228.) Still, it’s wonderful. I’m sitting out on the porch in the late afternoon sun as I write this message.

Rounding the bend once I’d made my way through town, I took in the light on the slopes beyond the temples (another range of mountains faces them): 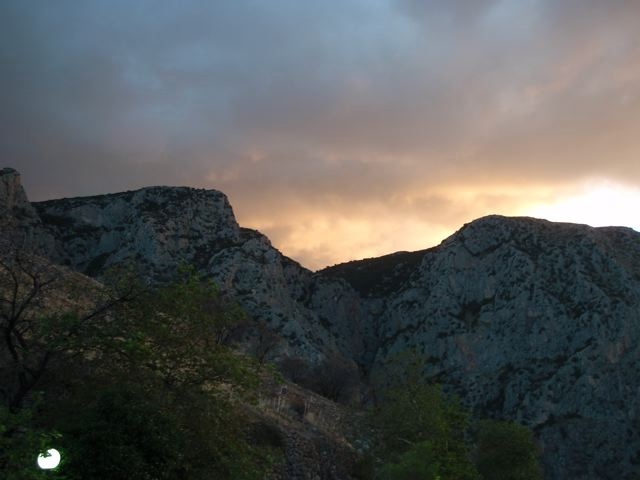 Once you enter the temple grounds, you begin a steep ascent up the Sacred Way, the path that was traveled by those bringing offerings and seeking to consult the oracle. You are surrounded by the ruins of the treasuries where the gifts to the God were kept. One, the Athenian Treasury, has been partly restored. Forty or fifty others appear only as foundations and tumbled ruins.

It was cloudy overhead, and the early morning light on the facade of the Athenian Treasury provides a wonderful contrast: 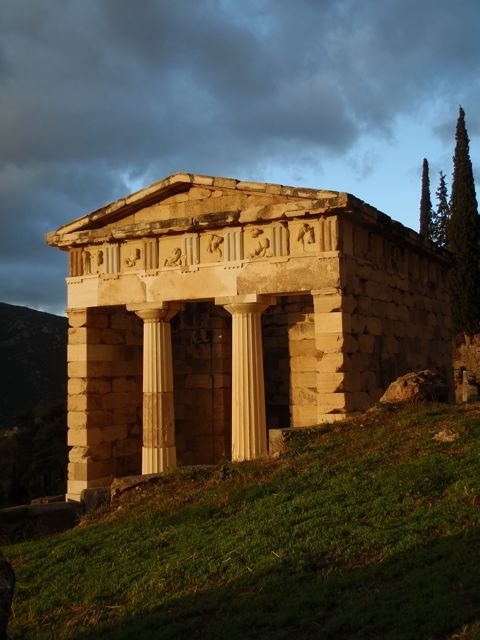 Because it was early, and no one was around, I took the opportunity to hop the rope and look at the treasury from the inside: 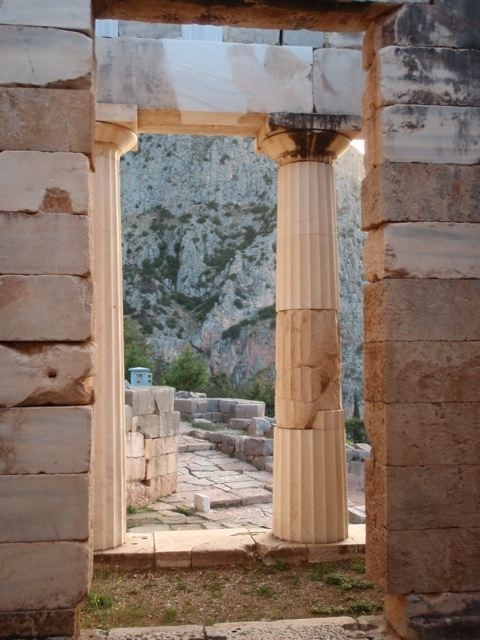 Just past the Athenian Treasury is the rock of the sibyl, the original, pre-classical oracle of Gaia, who was supplanted by the worship of Apollo, who killed the dragon Python, who guarded the oracle, and took his name, thus becoming Pythian Apollo. 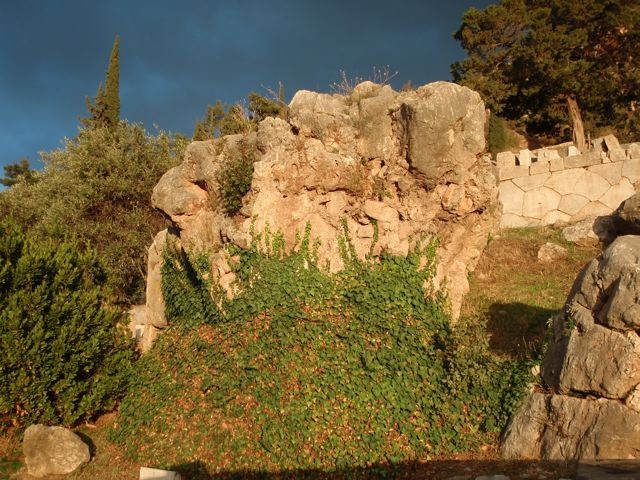 The temple of Apollo is around the bend, on the height above and behind the original sibylline rocks. It was within this temple that the classical greeks consulted the oracle, in an inner chamber. 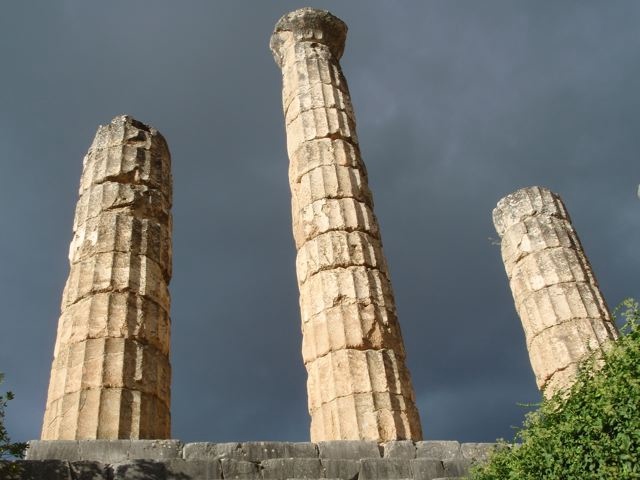 Only a few columns of the massive temple have been restored; the long ramp was for animals brought up for sacrifice: 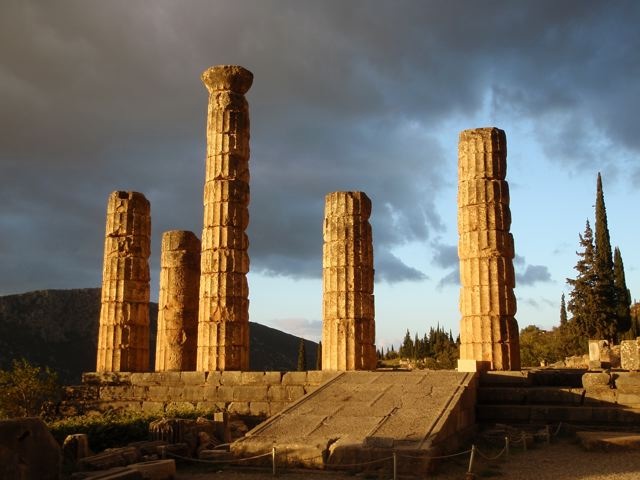 Stepping inside the sacred boundary of the temple, I was able to capture the columns backlit by the rising sun: 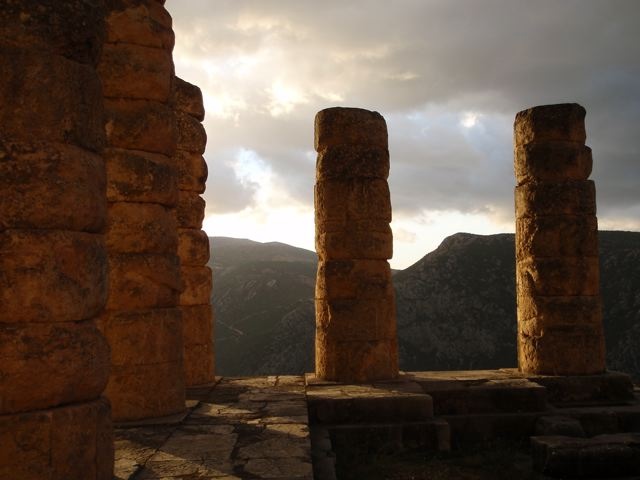 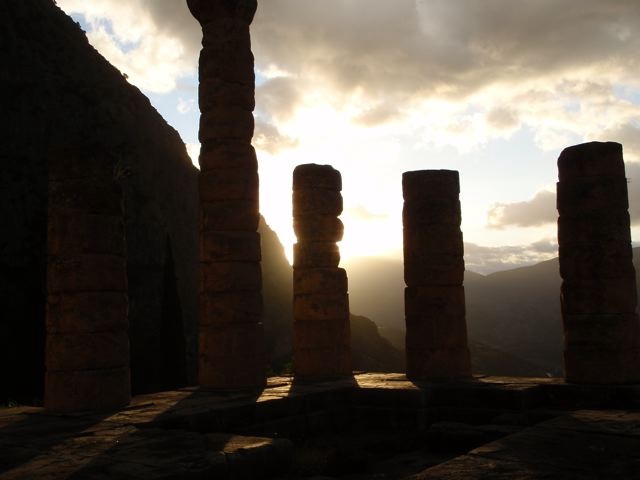 Proceeding further up the Sacred Way… 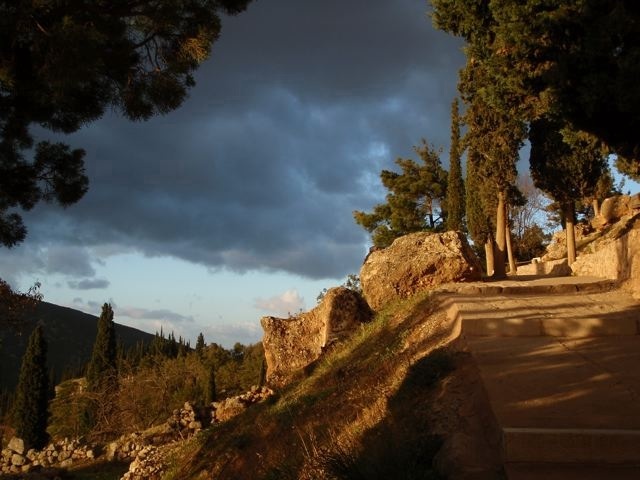 …you come to the theater. Like the Stadium, it was rebuilt in the time of Hadrian, but the siting and much of the structure is original. Greek theaters were always built on high hillsides. Theater was performed during religious festivals, with the spectators looking down on the morality tale much as the gods look down on us from Olympus. 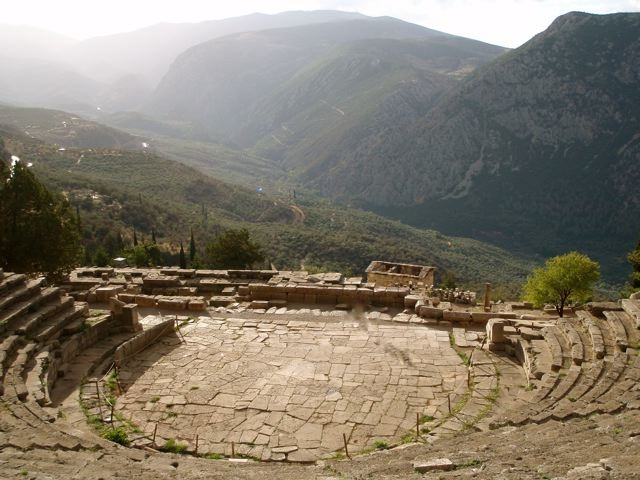 You can see how much elevation I’ve gained, with the temple of Apollo below the theater. 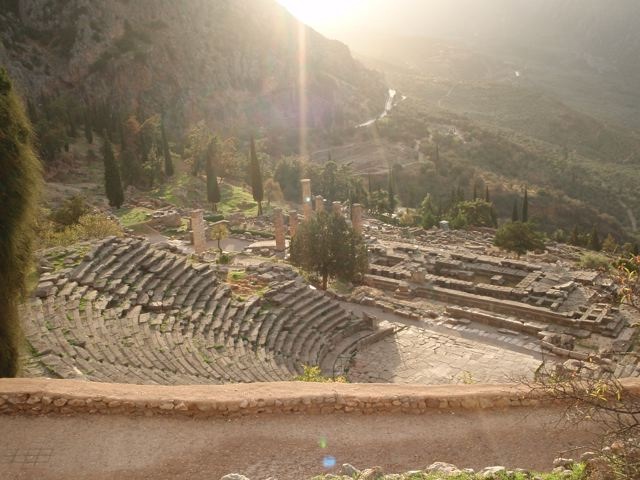 Another quarter mile or more of switchbacks and you reach the stadium, at the highest level of the temple precinct. Check out what appears to be the starting line! 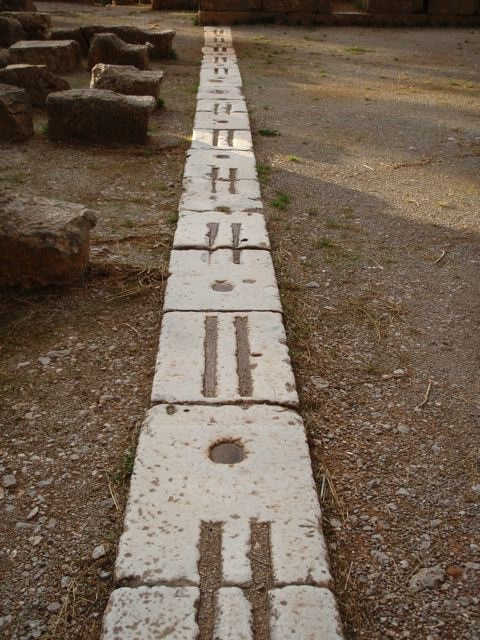 The beauty of being there so early, before even the guards, was that I got to scramble around and above the stadium (in addition to running the length!), giving me some fantastic views of it: 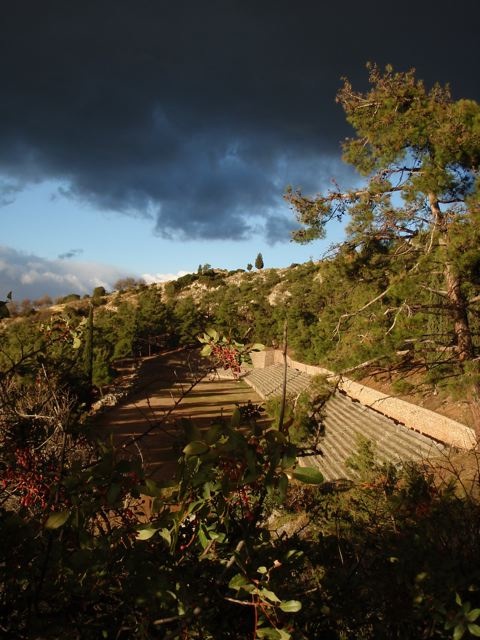 In the rocky tumbles between the stadium and the cliffs, I found fields of yellow crocus: 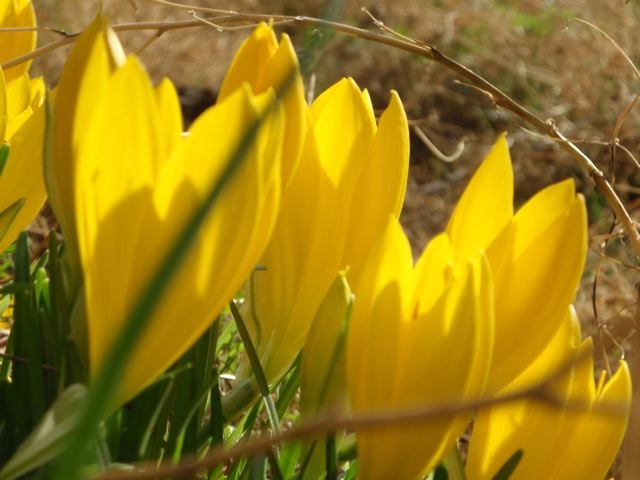 Finally, duty called – my agreement to get back to the hotel to wake Christina – and I descended the mountain. But first, I paid my respects at the temple of Athena another half mile down the road. When I was a kid, I always loved Athena, the goddess of wisdom. I wondered how anyone could regard any of the other Greek gods more highly. I guess she’s still my favorite. 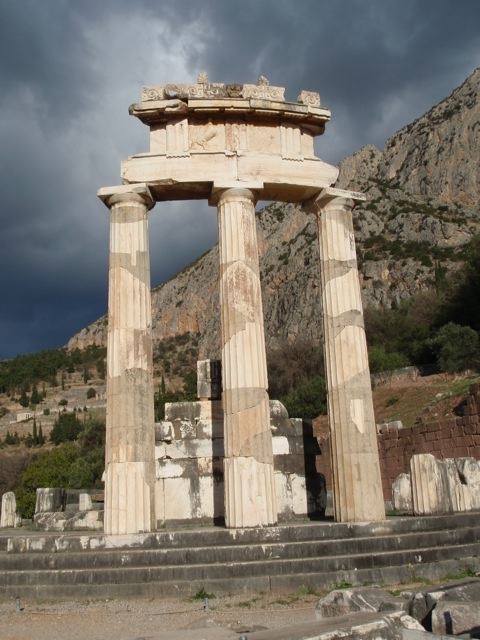 Walking back to town, I was rewarded with another wonderful view of the Gulf of Corinth. I can’t stop shooting pictures, because each moment is so different. 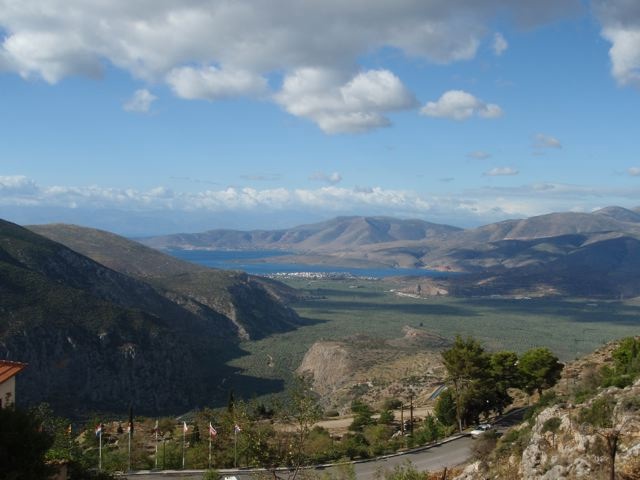 In short, if you come to Greece, Delphi is a must. You can go to the temple grounds again and again. The views I just gave you were from my second visit. Christina and I had made it up as far as the theater last night, before dusk and the guards forced us to descend; after getting back to the hotel this morning and waking Christina, I returned for a third visit. Each was magical. The sense of history is intense, the natural beauty of the setting is as great as I’ve seen anywhere, with the temples set below great brooding cliffs, with stunning vistas.

Here are a few shots from our visit yesterday at dusk: 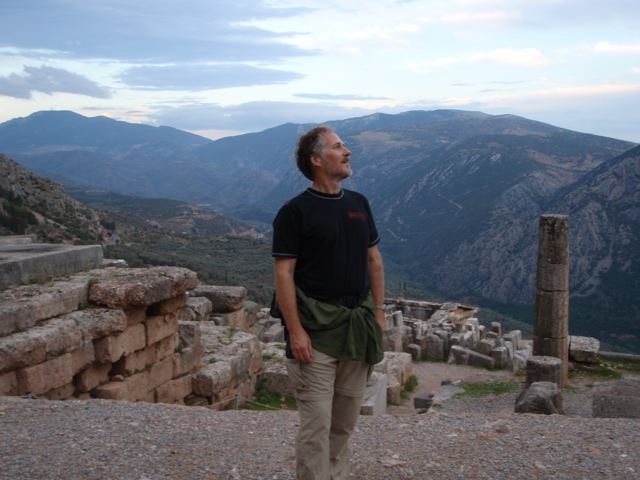 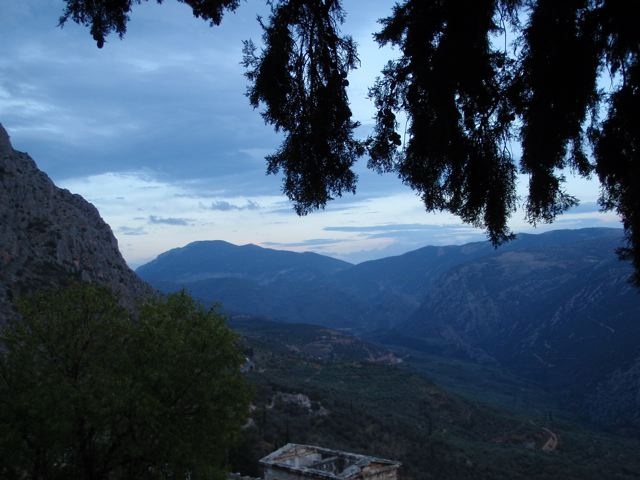 And here are a few shots from our midday (or rather, all-day, visit today).

Christina recites from her play, in the theater: 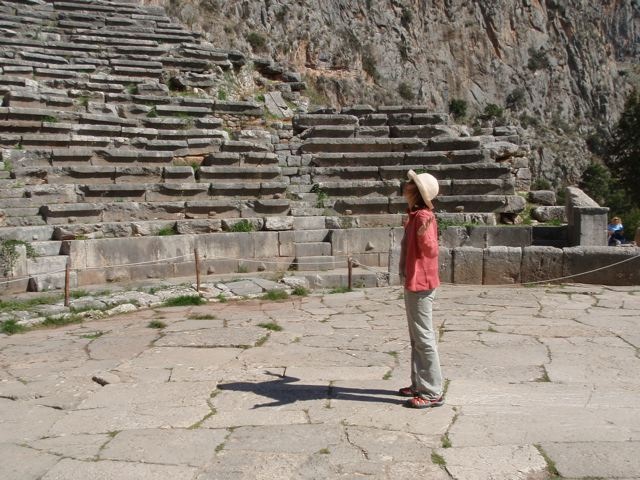 And I contemplate the races: 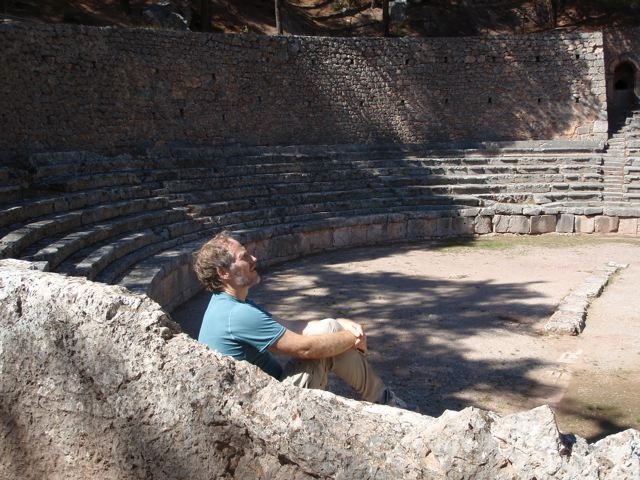 I will likely go again tomorrow morning, although I may first go hop a fence at the now closed Fountain Kastalia, where supplicants and the priests of Apollo always bathed before entering the sacred grounds. Byron also bathed there, thinking it would enhance his poetic prowess. A small fence can’t keep me away!