One Hundred Years of Exile

One Hundred Years of Exile

$18.99A Romanov’s Search for Her Father’s Russia

“A vividly intense and personal saga…. It stirred such powerful emotions…” —Marina Romanov, grandniece of Tsar Nicholas II of Russia

One Hundred Years of Exile: A Romanov’s Search for Her Father’s Russia is the story of one woman’s journey through 100 years of history to find peace with her father. Tania Romanov Amochaev and her father were both exiled from their homelands as infants; both knew life in refugee camps. Their shared fate does not lead to mutual understanding.

The family’s immigration to San Francisco heralded a promising new future—but while Tania just wanted to be an American, her father could not trust that this was his final asylum. His fears and his resistance to assimilation leave Tania with deep resentment toward him and her Russian heritage. Decades later, his unexpected death exposes Tania’s open wounds and a host of unanswered questions about her father and his story.

A serendipitous meeting with a last surviving member of the Russian royal family, followed by a baffling error that miraculously connects her with unknown relatives, catapults Tania on a quest for answers in her father’s homeland.

Tania’s story proves inseparable from Russia’s, featuring Cossacks who fled revolution, a family who survived Stalin, and a family of royal exiles, culminating in a meeting between princess and peasant.

One Hundred Years of Exile is a moving story of how revisiting the past can bring not only forgiveness and redemption, but something far more powerful as well.

“Russophiles and history buffs will appreciate this powerful, gripping account of the Russian Revolution’s lasting effects on survivors and the generations after them.” —Booklist

“Romanov has situated her absorbing story exactly at the intersection of history and memoir. It’s a wonderful read.” —Tamim Ansary, author of Destiny Disrupted: A History of the World Through Islamic Eyes

“A sweeping narrative full of darkness, light, and beauty.” —Linda Watanabe McFerrin, author of Navigating the Divide and Dead Love

This book is dedicated to Daria, Marina, and Artem, my Romanov Amochaev family without whose inspiration this book would not exist.

Chapter 8: The Other Romanov

Chapter 13: On to Crimea

Chapter 17: The Ones Who Stayed

Chapter 37 Livadia and the Romanovs

Chapter 40 The Ties That Bind Us

Glossary of Russian Words and Names

She really hadn’t needed to say it again. Pavel knew that when his daughter stated something so categorically, there was little chance of budging her. That was why at twenty-five she was still single. But Pavel had prevailed upon his good friend Ivan to set up this match. Daria would be getting married.

“We’ll discuss it later,” he said. “Go help your mother.”

The noise of arriving horses broke the silence around the ancient isbas—mud-walled huts with straw roofs—that lay scat- tered through the village. Most of the region hadn’t changed in generations. The roads were still of packed mud—plenty of dirt to go around in this land—as they had been for years. Gently sloping wheat fields surrounded them far into the distance.

Daria watched in despair as her father stomped out of the house. How could he hand her off to someone called Mikhail, a man he hadn’t even met? And Papa’s friend Ivan—who could do no wrong in her father’s eyes—did he think he could con- trol her destiny? Did they expect her to remain silent? To just stay in the kitchen and cook? From the kitchen Daria heard her father sitting down at the table with one of the fellows. Through the window she could see the other one putting the horses away. She and her mother were organizing zakuski, the starters they always served to guests, and of course the vodka was already on the table.

“Mama, I think they are here,” she said, hoping for some support.

“Yes, Daria, they are, and perhaps you should check that tray you are working on,” Natalia replied. “You need to make a good impression, you know.” Natalia wasn’t confident of Pavel’s strategy, but she respected her husband and would support him. Their daughter was just so stubborn.

Pavel had no time for a recalcitrant daughter who didn’t understand that he was looking out for all their best interests. The spring of 1910 was a crucial time in Russia, and he had to act quickly or be left behind. His family had spent several years working in the Don Cossack region, a fertile farmland on the southern steppes of Russia near Ukraine. The Cossacks had always been independent and had never been serfs. Pavel, from nearby Tambov region, understood the value of that freedom.

The nomadic existence of a migrant worker had never been his objective. Russian peasants—Pavel’s ancestors among them—had been freed from serfdom fifty years earlier, two years before American slaves were emancipated. In theory, from that time on, they could hold land of their own. But a variety of laws had prevented that. Now things were chang- ing. Working near Khutor Amochaev, he had grown close to young Ivan Amochaev during these years, and they shared their stories. Ivan’s family were good employers, treated the workers well, and paid fairly.

“I was just finishing my military service around 1905,” Ivan told him. “But it was all far away from here—the Japanese and Balkan wars, and the protests and violence. I never got involved in any of that.”

“Yes, those were hard years,” agreed Pavel. “I was grateful that my son Pavelik was too young for service. I know our dear Tsar was threatened, and it looked bad for a time. Then things settled down.”

“I’m not sure everyone was satisfied. For some people that revolution in 1905 didn’t go far enough,” said Ivan. “But it definitely changed things for my family.”

“Well, because of it, I now have my own land!” Ivan said, proudly.

In 1906, a man determined to protect the monarchy of Tsar Nicholas II, Pyotr Stolypin, became Prime Minister of Russia. He implemented major reforms in an effort to appease the revolutionaries. The government evolved to a more repre- sentative one, with a legislative body called the Duma and a constitution. When land ownership laws were changed, Ivan quickly took advantage of the situation, and now had many acres of wheat.

“But doesn’t your community ultimately control what is grown? Isn’t it a family plot?” Pavel knew that the Cossacks had long held land under a complex form of communal ownership. But those land reforms had freed Ivan to move to independence from the community and acquire land outside the traditional communal holdings.

“No. It’s my land. It is mine!” Ivan punched his hand with his closed fist. “No one can tell me what to do with it.”

That sentence stayed with Pavel. Ivan, in his early thirties, was extending his reach beyond just planting and harvesting crops. He expanded from local small-time trade to milling his own grain and doing business with larger markets. Clearly a man with a future, he had his eyes on dealing directly with Moscow. Now Pavel, for the first time, was also working his own land. Ivan had helped him achieve this independence. Pavel’s portion wasn’t a big piece, but it would be enough, especially now that his four children were getting older, and, like Daria, would soon be moving away.

It had all evolved quickly. Pavel had mentioned that it was time for his daughter to consider marriage. Ivan told him about his cousin Mikhail Amochaev, who would soon be finishing his military service. One thought led to another, and they both realized there was a match to be made here. Ivan spoke to Mikhail’s father, who confirmed his son as a suitor for Daria. Ivan and Mikhail were here to finalize the agreement, and Pavel intended to ensure the success of their mission. 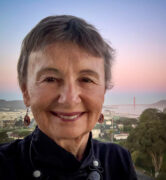 Tania Romanov Amochaev is the author of Mother Tongue: A Saga of Three Generations of Balkan

Women (2018) and Never a Stranger, a book of travel stories published in 2019. Born in Serbia, Romanov spent her childhood in a refugee camp and grew up in San Francisco. She is a prize-winning photographer and global traveler as well as an author. In her previous careers, she was the CEO of several technology companies and the founder of a non-profit aimed at helping youths graduate from public school. Tania has a Mathematics degree from UC Berkeley and an MS in Management from the Stanford Graduate School of Business.