Get the best collection of travel stories about Greece:Travelers’ Tales Greece. See our full catalog of books.

Christina loves ancient theaters – for her, they are the high point of any classical site. So we were really looking forward to our visit to Epidaurus, the largest and best preserved of all Greek theaters.

We had arranged to meet a guide, who took us first through the Aesclepion, the ancient health spa and temple to Aesclepius, the god of healing. We’re glad we had the guide, because compared to other sites we’ve visited, the Aesclepion is nothing to write home about. Lots of building foundations, nothing substantial still standing or restored. 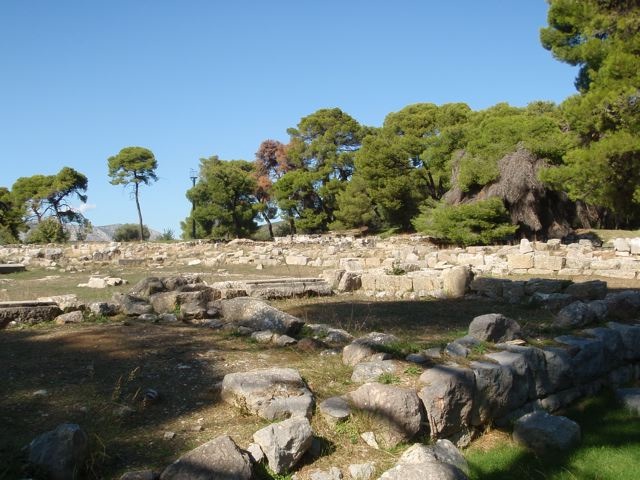 But the stories were great. This was big business! Would have fit right into the hucksterism of new age American health businesses! If you were really sick, you were turned away. If you turned for the worse, you had to leave. Pregnant women could come early in their pregnancy, but had to have their babies elsewhere: only success stories wanted here.

Meanwhile, people whose cures failed were blamed because they left insufficient offerings to the god. These stories were spread widely.

Among the buildings: a massive hotel for visitors. Interestingly, it had six or seven separate courtyards, perhaps to separate people with different kinds of diseases, and the sick from the well. And of course, it was one of the priests of Aesclepius who, a few centuries later, did begin the practice of modern medicine, keeping records of symptoms and outcomes.

The theater was another matter. It is magnificent. The guide told us that the official capacity is 14,000 (vs. 5000 in the temple at Delphi) but that at one heavily oversold Maria Callas concert, they squeezed in nearly 17,000. Unlike at Delphi, there’s no way to get up above to see a view of the whole thing, but this picture may give you a sense of the scale: 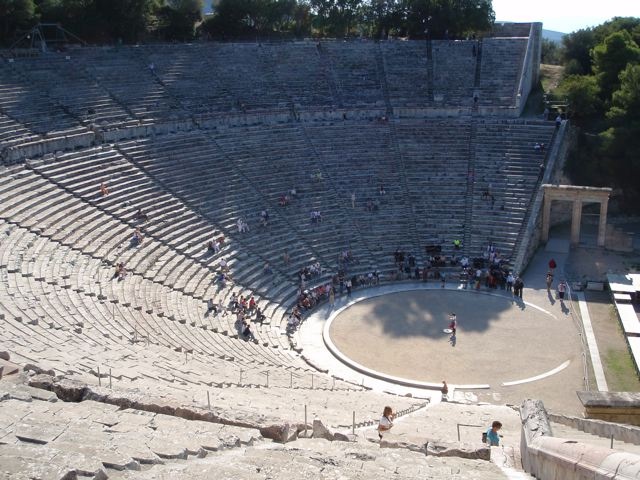 Greek theaters always have a great view, since the idea was that the spectators at the plays put on at religious theaters were supposed to be looking down on the follies of man, as the gods look down on us from Olympus.

The view at Epidaurus isn’t a patch on the view at Delphi, or at Segesta in Sicily. And the guide we had wasn’t a patch on Douglas Kenning, who took us around Siracusa in Sicily. His passion, his depth of knowledge, and his love of the place came through in every story tumbling from his lips. Our guide here was very matter of fact, telling us the story as if by rote. But we’re still lucky we had her.

When we came to the theater, she told us little or nothing of its history. But she did demonstrate its perfect resonance. Standing on the stone that marks the acoustic center of the theater, she began clapping faintly, then gradually increasing the volume. Above a certain volume level, a magic amplification happened, as the theater began shouting back her claps, louder and louder, echoes upon self-reinforcing echoes.

We stood on the stone. I recited poetry; Christina recited passages from her play. It’s like talking with a microphone. Once you get above a certain volume, the theater picks up everything you say, amplifies it, and supports your voice.

After the guide left, we sat a long time watching the people come and go. We heard opera arias from elderly Italians. We heard embarrassed shouts from reluctant visitors urged on by their companions. And of course, we got back out there again and again ourselves as we thought of new things to say or sing. 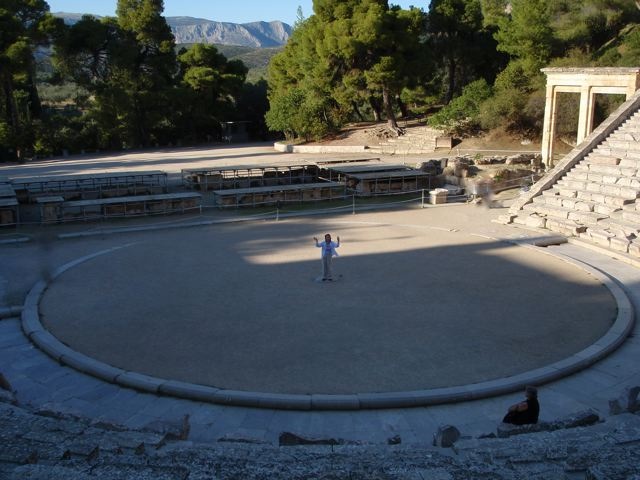 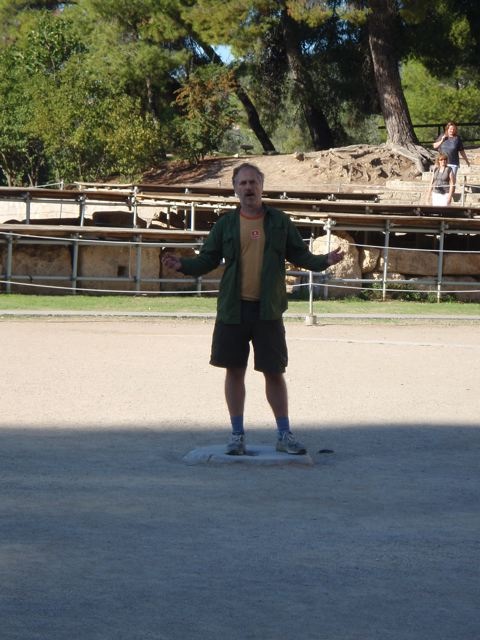 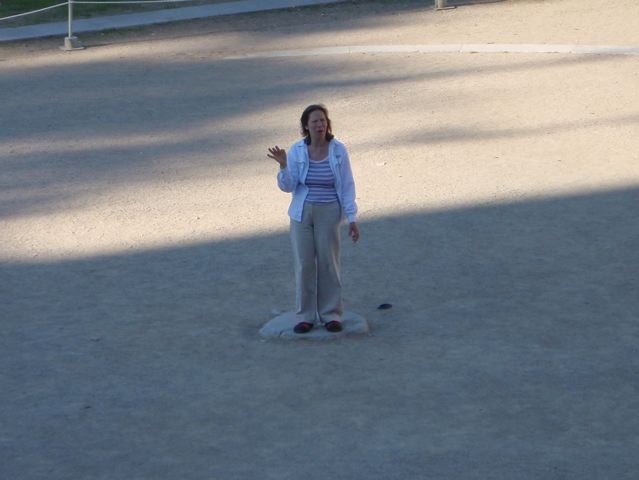 We resolved to follow Meara’s practice, and bring a sound recorder on our trips in future as well as a camera. The sound was what really mattered here. We tried recording with the camera, but it really doesn’t do the sound justice.

***
Surprisingly, we found the same perfect resonance at Mycenae the next day, in the huge tholos tomb variously referred to as the Treasury of Atreus or the Tomb of Agamemnon. This is a huge domed chamber – perhaps 75-80 feet high – that now occupies the center of a hill. Standing in the middle, we repeated our sound experiments from the previous day at Epidaurus, discovering just how well the ancients understood the dynamics of space. 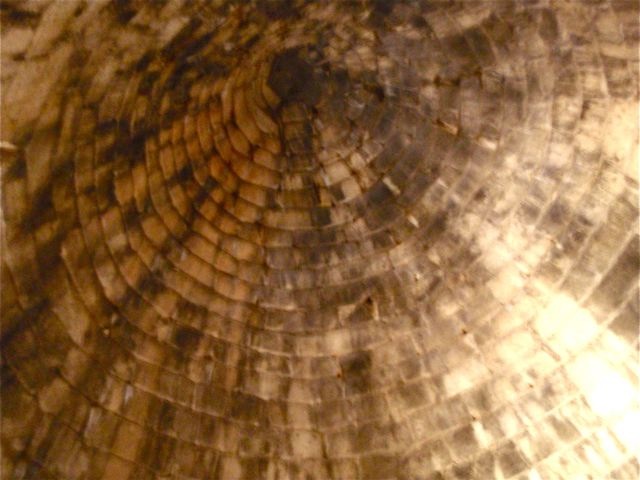 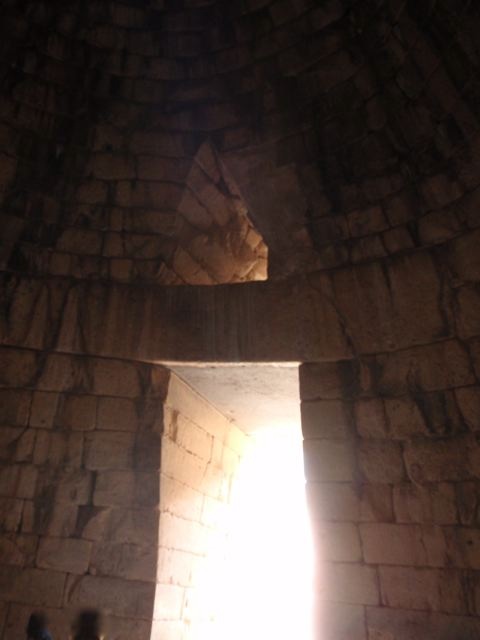 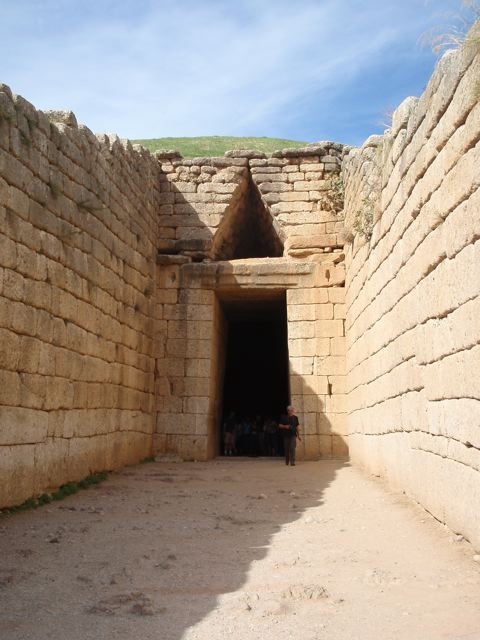 P.S. When you go to the tomb, be sure to climb the hill that now encloses it. At the top, just across a small fence, we came across a tiny church, with a bell highlighting the setting sun. 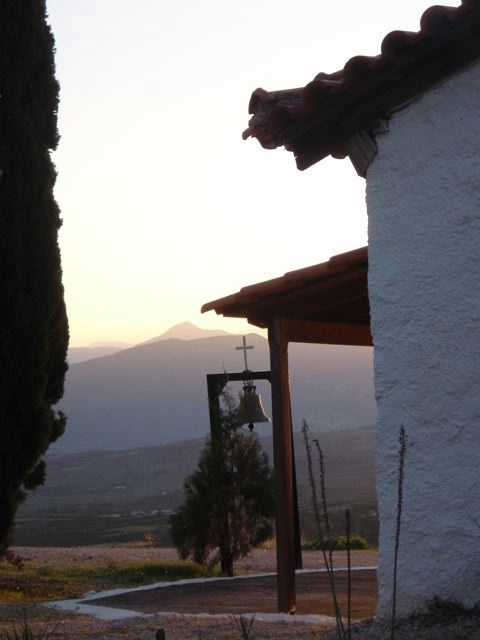