When I wrote an email to Jennifer Leo, editor of the Women’s Travel humor book Sand In My Bra, I volunteered myself to be her intern during her book’s promo tour in Montreal, Canada. I was so enthusiastic about the idea that I even suggested that I’d pass out flyers on the street with the only relevant eye-catching gag I could think of: while wearing a bra.

However, I wasn’t too concerned about my commitment to public humiliation as my cross-dressing hi-jinks would be performed during Montreal’s famous international comedy festival, the Juste Pour Rire (Just For Laughs) Festival. The annual fair is held every July and invites the industry’s top stand-up comedians, writers, performers and filmmakers—whether they’ve poked fun at the way Canadians say “aboot” or not—along with 1.7 million attendees from around the world, for a two week jaunt of giggles, chuckles, cackles and snorts. While most shows in the festival are performed in venues all around the bilingual metropolis, a big street fair is held in the Latin Quarter, which spans about ten blocks that are fenced off for street performers, clowns and the high traffic of pedestrians. This street fair was the perfect stage for a bra-wearing flyer guy. 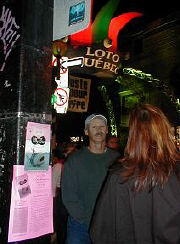 Playing intern, I accompanied Jen and Montreal-based Sand In My Bra contributor Christine Michaud on their local book tour, from a reading at the downtown flagship Indigo bookstore to their radio interview at CBC. In between events we’d leave stacks of promotional postcards at venues, bookstores and boutiques, or hang individual ones on lampposts in the Latin Quarter. But by the beginning of Sunday on the last weekend of the festival, we still had a thick pile of postcards to distribute. It was time for drastic action, and by that I mean “time for me to shop for a bra.”

After a lunch of smoked meat sandwiches at Montreal’s smoked-meat institution Schwartz’s, we browsed the trendy boutiques on the fashionable Boulevard St. Laurent. With Jen’s feminine eye, we searched for the perfect bra. We saw many brassieres: red bras, blue bras, lacey ones and frilly ones—the list goes on like a Dr. Seuss book.

We were looking for a loud pink one that would match the color of the flyers and the book cover, and finally found the perfect bra at Dex, a chic women’s clothing store. Hot pink and perfect. I didn’t exactly know what size I was, but my options were limited anyway since the only one in that particular shade of pink was a 34A. I tried it on in the store over my t-shirt, and it fit as snug as a cummerbund around Luciano Pavarotti. The bra was a little tight, so we decided to put it on hold in hopes that a nicer fitting one would turn up at another store.

“And I’m holding it for…?” the store clerk asked the two of us, waiting for Jen to say her name so she could write it down on a note.

I immediately got weird looks from her and all the surrounding customers.

Jen and I continued browsing down St. Laurent but found nothing comparable, so we went back to Dex to reclaim the bra. Fifty dollars later—it was a Calvin Klein after all (only the best for my first brassiere)—I was prêt-à-porter in my first public cross-dressing-in-lingerie experience.

While Jen sorted out the books and the postcard flyers in my hostel lounge, I went up to my room to get my bra on. I squirmed like a walrus in a straightjacket as I struggled to get the hook into the loop across my back. I’ve had enough trouble trying to get these things off of girls, let alone putting one on me. I was just waiting for one of my dormmates to open the door and catch me in the act. I could just picture it, me struggling with my back turned to him, him opening the door quietly, noticing me, thinking he was in the wrong room but not saying a word, leaving, closing the door quietly, and then wondering in the hallway, “Wait, was that a husky lesbian, or that crazy Yank from New York?”

I eventually got the hook into the loop, positioned the padded cups over my nipples, and put on a shirt. There was no mistaking that I was indeed wearing the brassiere underneath with the noticeable mounds on my chest. I felt like a character on Bosom Buddies. 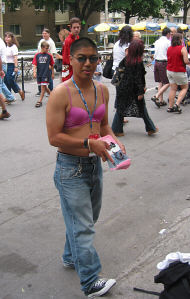 Jen and I scoped out the scene that sunny afternoon at the street fair in the Latin Quarter, looking for a place to set up. We didn’t exactly have an official vendor’s permit (just Jen’s press pass), so we were wary of security guards. After analyzing the pedestrian traffic situation, we chose a busy corner on the Boulevard de Maisonneuve and Rue Sanguinet, next to a small outdoor staging area for struggling French-Canadian stand-ups. While Jen laid out a beach towel on the sidewalk to display the books, I suppressed all my dignity and took off my shirt. I immediately caught the attention of passers-by who were doing double takes, so I did what I used to do when I was a kid: put on sunglasses and pretended that they made me invisible. I took a stack of postcards, sucked in my manliness—a.k.a. beer gut—and went off into the crowd. I was pretty in pink and hopefully people would notice.

“Notice” was an understatement I soon discovered. With the hot pink bra on, I was anything but invisible. While a stack of flyers may take the average flyer guy a whole day to be distributed, these things went so fast you’d think the locals thought I was giving away free hockey tickets. Everyone wanted to know what I could possibly be trying to promote in such a get-up. Some even assumed I was just an official part of the festival, including two security guards. I passed out over a hundred flyers in about ten minutes, and then spent the rest of the afternoon holding up books, trying to direct people over to Jen manning the books at the sidewalk. 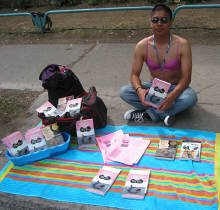 Wearing the hot pink bra in public wasn’t all smiles and giggles. Over the course of the afternoon, I received many cat calls from both men and women: “Hey sexy!” or “Ooh la la!” or “Hey buddy, nice man-ssiere!” At one point someone came from behind and groped me. Another time, someone gave me the ever-painful bra-snap and ran away. I suppose it was payback for endless amount of times Americans poked fun at Canadians…eh?

All theories of retaliation aside, in the end, the whole cross-dressing comedy festival experience was a fun and productive one. We sold over a dozen books that afternoon—not bad for an impromptu sidewalk sale—and got the word out to thousands of people. I regretted nothing—it was all “just for laughs” anyway—that is, until later when I noticed the tan lines across my chest.

I suppose the Canadians got their revenge after all.

Erik R. Trinidad is a metro-New York freelance travel writer who once wore a tuxedo in Antarctica so he could try and blend in with the penguins. The hot pink bra in this story hangs proudly off a hook in his bathroom. Erik’s collected works can be found at:www.TheGlobalTrip.com.