“There are tears in things, and mortality touches the mind”

“There are tears in things, and mortality touches the mind”
Get the best collection of travel stories about Greece:Travelers’ Tales Greece. See our full catalog of books.

That’s from Virgil, not one of the Greeks, but it captures the mood of the day. We visited the Athenian Agora and the Archaeological Museum, and in both places, it was the touch of mortality that brought the most significance to the day.

How amazing was it to visit the Agora, where the ancient writers, philosophers, and fathers of democracy (not to mention the sophists and the warmongers) tread and argued! The leafy grounds, the tumbled walls, and the Temple of Hephaestus, the largest and best preserved Doric temple in mainland Greece all made the Agora more remarkable to me than the Acropolis, which, at least in its current stage of reconstruction, is better from a distance than up close. And of course, it looms in the distance: 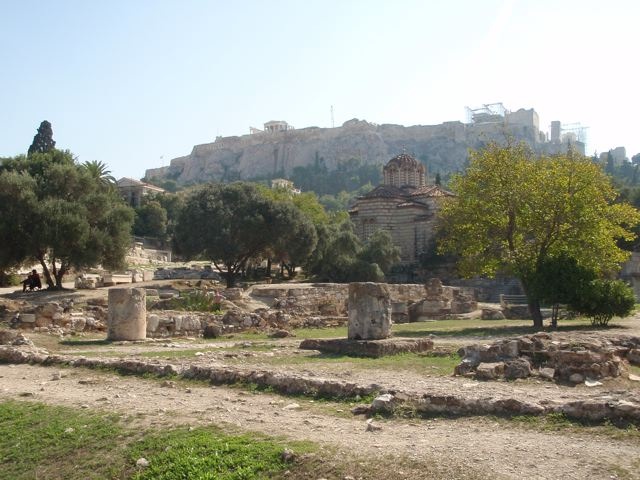 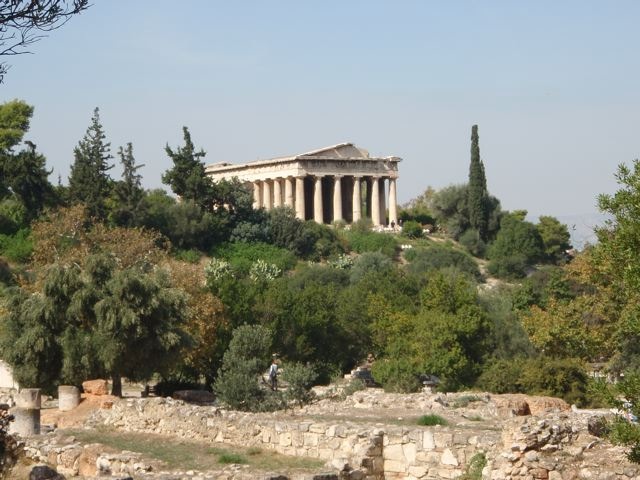 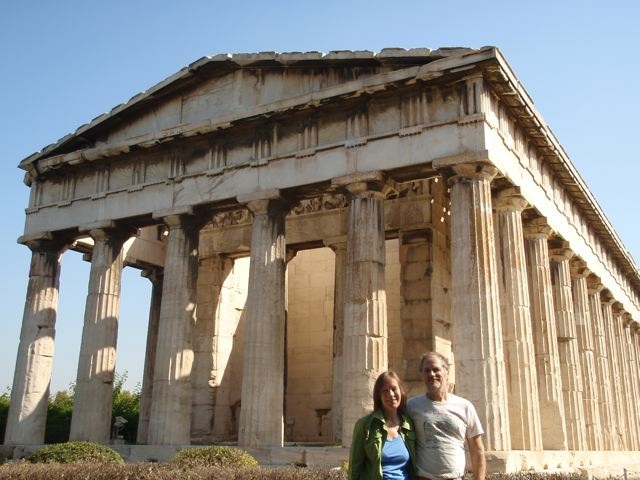 But the most special moment for me was coming to the street of the marble workers – and thinking, “Socrates was a stone cutter. Perhaps he lived here.” And then, right around the corner is a building that is potentially identified as the prison where Socrates may well have drunk the cup of hemlock. What a thrill ran through me to be near that spot, even though only foundations remain: 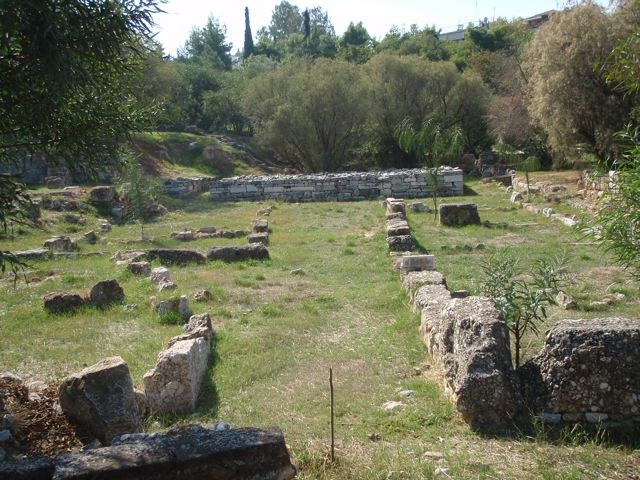 From Phaedo, in the Jowett translation (1892):
Then raising the cup to his lips, quite readily and cheerfully he drank off the poison. And hitherto most of us had been able to control our sorrow; but now when we saw him drinking, and saw too that he had finished the draught, we could not longer forbear, and in spite of myself my own tears were flowing fast; so that I covered my face and wept, not for him, but at the thought of my own calamity in having to part from such a friend. Nor was I the first; for Crito, when he found himself unable to restrain his tears, had got up, and I followed; and at that moment, Apollodorus, who had been weeping all the time, broke out in a loud and passionate cry which made cowards of us all.

Socrates alone retained his calmness: “What is this strange outcry?” he said. “…I have been told that a man should die in peace. Be quiet then, and have patience.”

When we heard his words we were ashamed, and refrained our tears; and he walked about until, as he said, his legs began to fail, and then he lay on his back, according to the directions, and the man who gave him the poison now and then looked at his feet and legs; and after a while he pressed his foot hard, and asked him if he could feel; and he said, “No;” and then his leg, and so upwards and upwards, and showed us that he was cold and stiff. And he felt them himself, and said: “When the poison reaches the heart, that will be the end.”

He was beginning to grow cold about the groin, when he uncovered his face, for he had covered himself up, and said–they were his last words–he said: “Crito, I owe a cock to Asclepius; will you remember to pay the debt?

“The debt shall be paid,” said Crito; “is there anything else?”

There was no answer to this question; but in a minute or two a movement was heard, and the attendants uncovered him; his eyes were set, and Crito closed his eyes and mouth.

Such was the end . . . of our friend; concerning whom I may truly say, that of all the men of his time whom I have known, he was the wisest and justest and best. 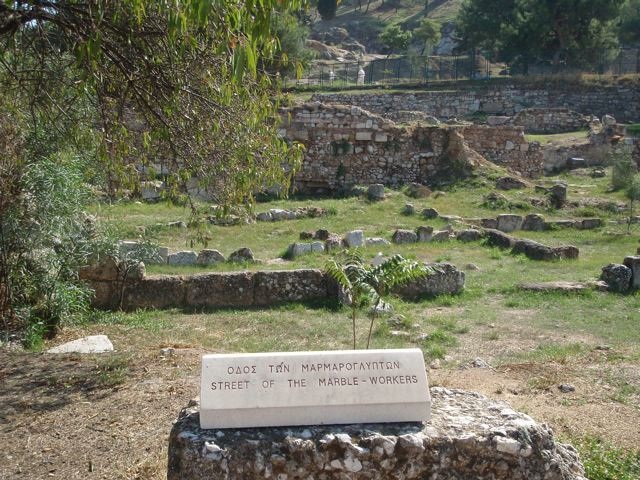 We went from the Agora to the museum. There’s some great stuff there, but it’s also remarkable how many of the best pieces were taken off by 19th century bandits to European museums. We spent several hours, and were just about to leave when I realized that the Antikythera Mechanism is in the museum, and ran back to find it. What an amazing mechanism. (See http://www.antikythera-mechanism.gr/ for details.) 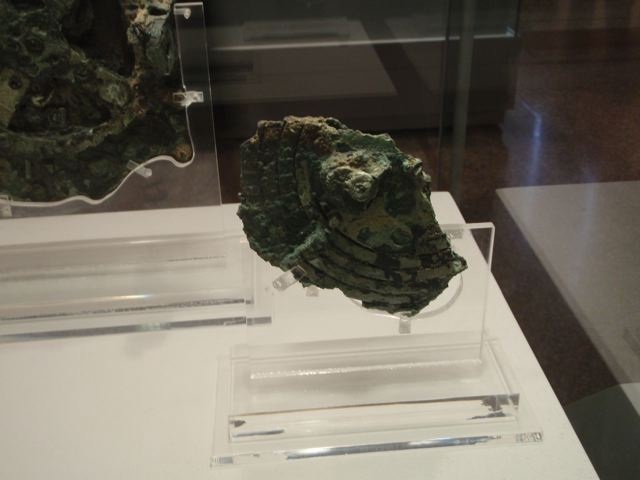 But then what stopped me in my tracks, and brought me to tears, was a display of arrow and spear heads from the last stand of the Spartans at Thermopylae. “Stranger, tell the people of Sparta that we lie here, obedient to their command.” I’ve always been a sucker for the grand gesture of bravery, and this is one for the ages. Of all the exhibits in this wonderful museum, I found this the most moving. 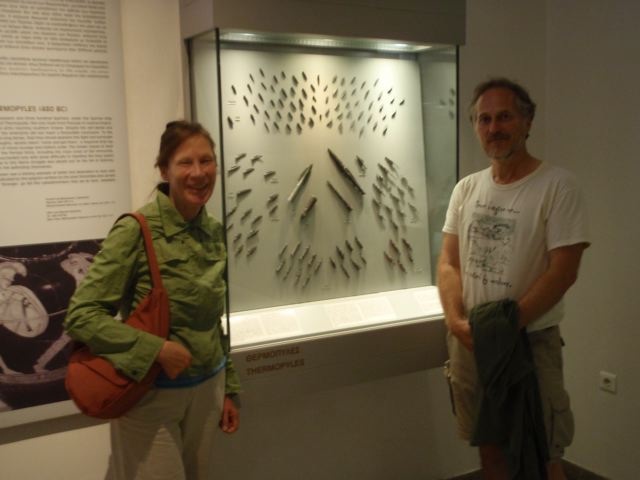 Tonight is our last night in Athens. Tomorrow, Christina leaves for home, and I leave for Spain, then Germany and the UK, before heading home in my turn. We’ve had a simply splendid time. I have loved every minute of it, and it will no doubt be a bit difficult to return to the workaday world (especially with three talks to give in the next week, none of them prepared yet.) And it’s been a bit hard to be away from the company at a time like this, when so much is on the line.

But distance also gives perspective. How short is man’s time on this earth. The oldest civilizations are only a few thousands of years old. And most have lived only a few hundred years. How arrogant we are to think that nothing will change (except for the better) in our own civilization, that we will enjoy an unchanging gaze rather than the eyeblink accorded civilizations of the past.

The world is good, though. We should enjoy what we can, endure what we must, and make choices that we would be proud to have remembered after thousands of years.

And with that note, I will enjoy a last view of the Acropolis from my hotel balcony, before bidding you all adieu. 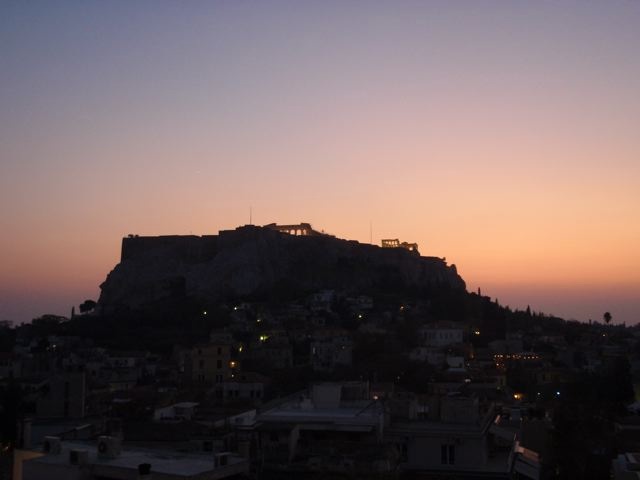