This morning, I scaled the walls of Mycenae

This morning, I scaled the walls of Mycenae

I felt a thrill, almost of familiarity, as I approached the hilltop fortress, set on a precipitous ridge between twinned mountains, Profitis Ilias to the north and Sara to the south. Perhaps it’s my childhood fascination with ancient Greece, which took me through an undergraduate degree in Classics rather than anything more practical, but perhaps it’s more atavistic than that, a deep memory of the roots of our civilization, so much of it born here.

As with my visit to Delphi, I set out early. The fortress city was framed against the dawn, where it flourished starting nearly 3500 years ago, and died by the sword 400 years before Homer sung its glory as the home of the great Agamemnon, who led the Achaeans off to war in far away Troy. 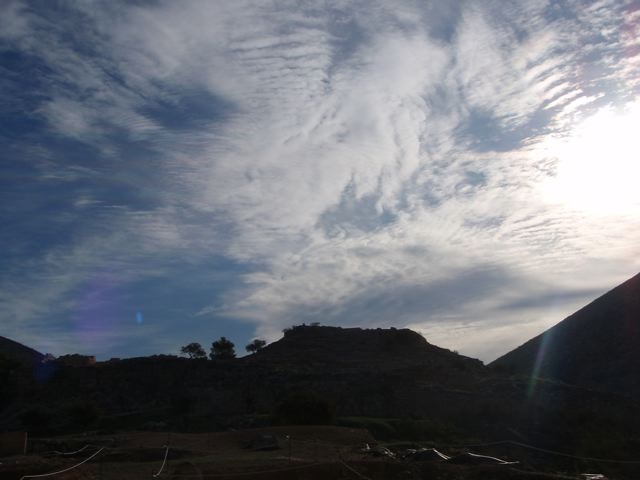 As I approached, the ramparts are still impressive. 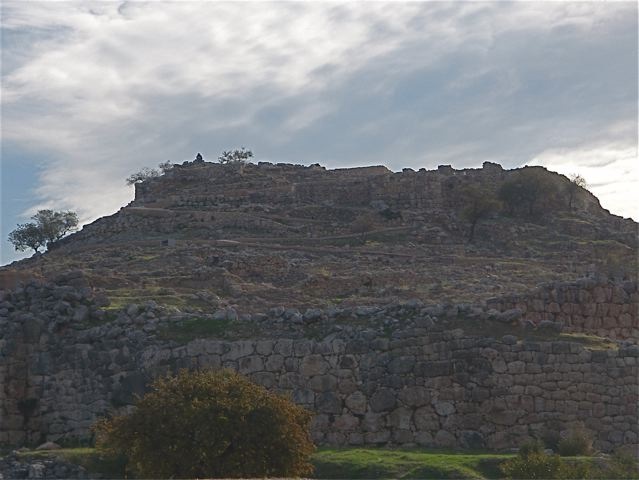 The path leads up to the Lion Gate, the earliest surviving piece of monumental art in Europe; Agamemnon and the other sons of Atreus were the original Lion Kings. I love the way the shape of the sculpture echoes the shape of the mountain as seen through the gate: 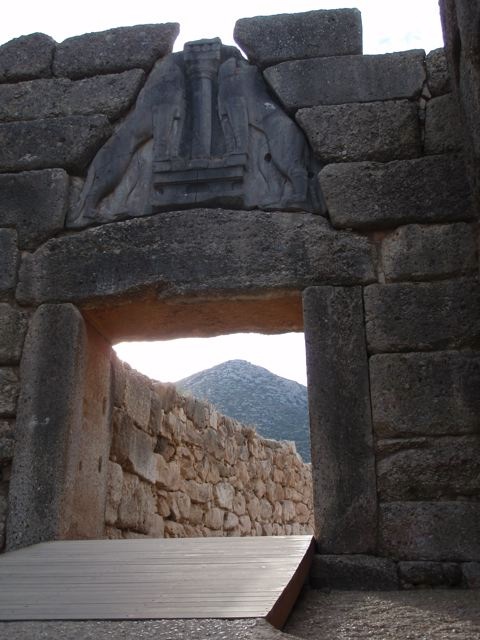 Ever being a fan of the way less trodden, though, I didn’t pass through the gate, but instead took a small footpath, perhaps a workman’s path, that led round the walls to the northwest. Before long, I saw something that captured my imagination: a low point in the Cyclopean wall. I will scale the walls, I thought! It is early. The site staff, inheritors of the long-ago watchmen of these walls, are away or asleep. And even if they are awake, I thought, their swords have been put away. 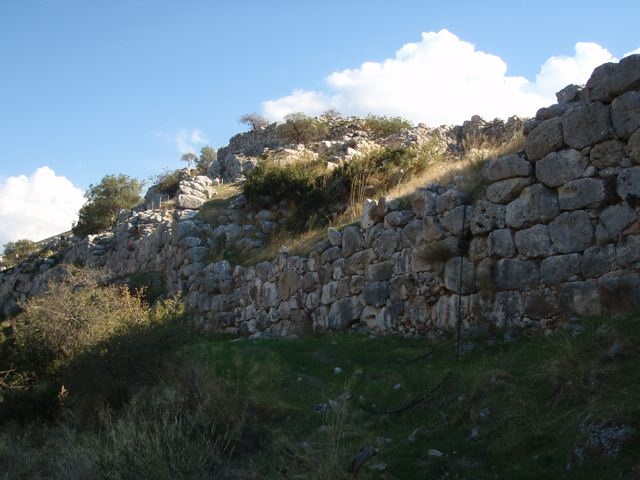 The Cyclopean blocks, 2-3 feet on a side, provided easy hand and footholds until I reached the top, where there was a steep slope of friable earth covered with loosely rooted grass, and nothing to hold on to. There I was, stuck. I couldn’t jump down. Even though it was only 10 or 12 feet, the rough stones below would turn or break an ankle. I could climb down. But as I clung precariously to my handholds, I thought: was that really easier than going forward? And besides, I told myself, this is what happens so frequently in rock-climbing: something that ought to be easy becomes difficult because you feel a touch of fear. Truly, “fear is the mind-killer.” I hoisted myself up and over, and scrambled to the summit of the hill, imaginary invader of the great citadel.

The views from the top are spectacular. I looked past a tree growing from the rocks, to see the distant hills to the Northwest. 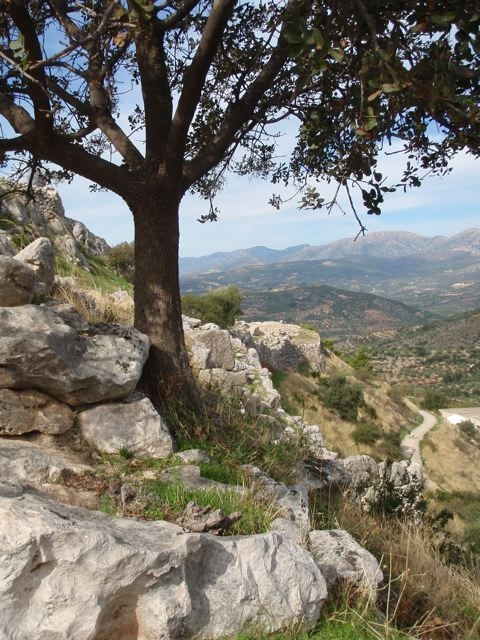 The views to the west and southwest are even more spectacular: 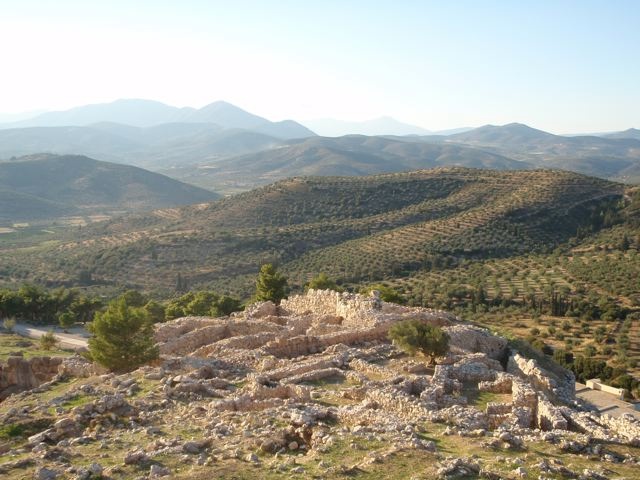 From the old palace, you look down in the distance to the fertile plains of Argos, where Diomedes, Tamer of Horses, ruled in the days of Agamemnon, and even further, the bay of Nafplion. 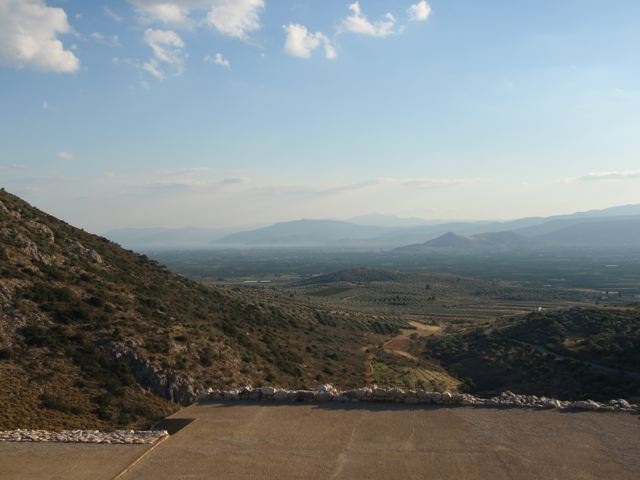 Exiting from my palace through the Lion Gate, I came across a crowd of tourists coming in. I’m glad I came early and found another way! 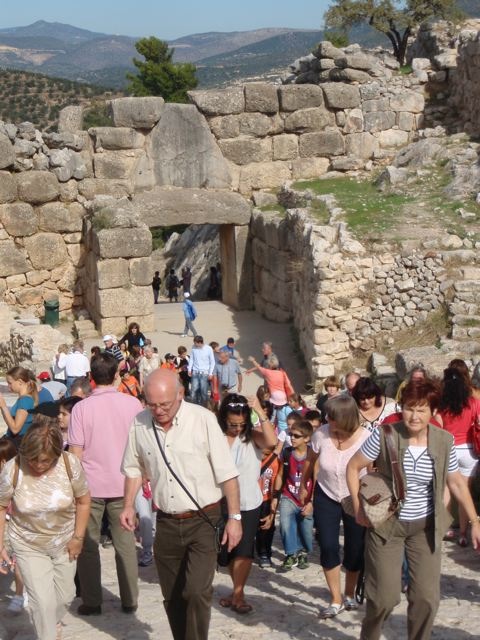 Crowds seem to get really serious around 11, and end by 4. The site is open 8 am to 7 pm. Draw your own conclusions.

Christina and I returned in the late afternoon, after the crowds had once more abated. I showed her where I had scaled the wall. Even though it wasn’t really dangerous, she was not pleased: 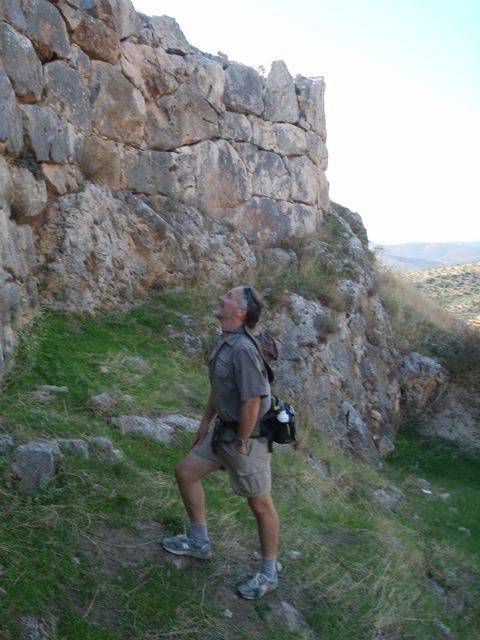 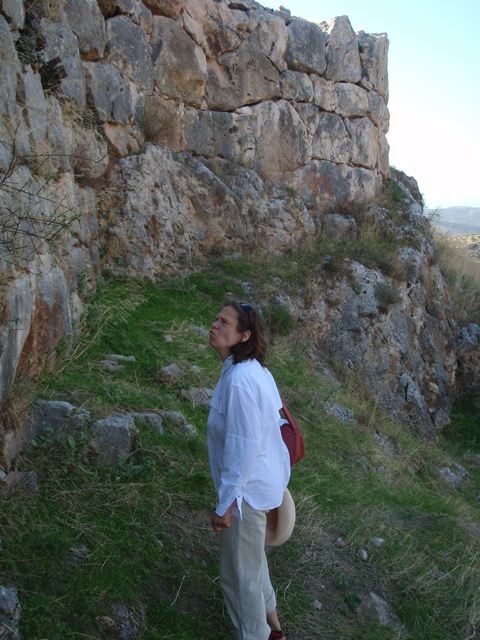 After touring the palace and fortifications for an hour, we sat for a long time on the edge of the walls, looking down a steep gully beside the walls of the palace. There were crocus and cyclamen blooming among the rocks. 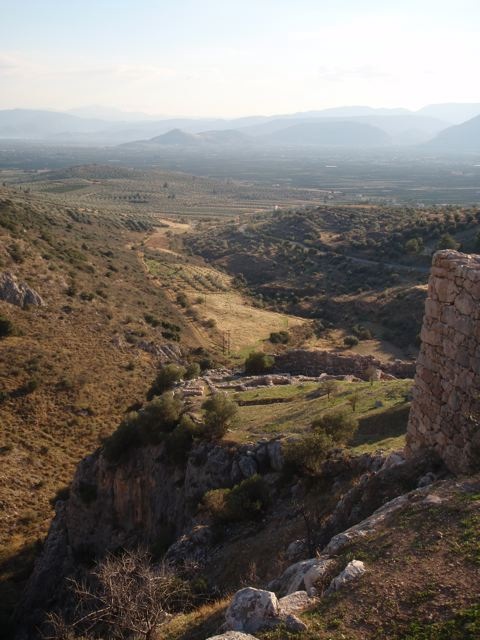 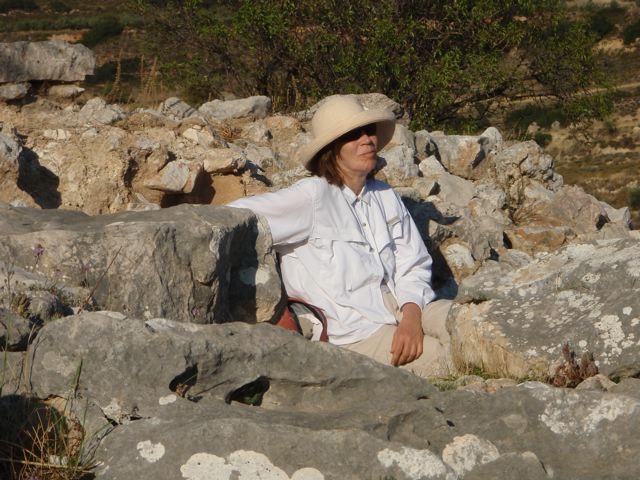 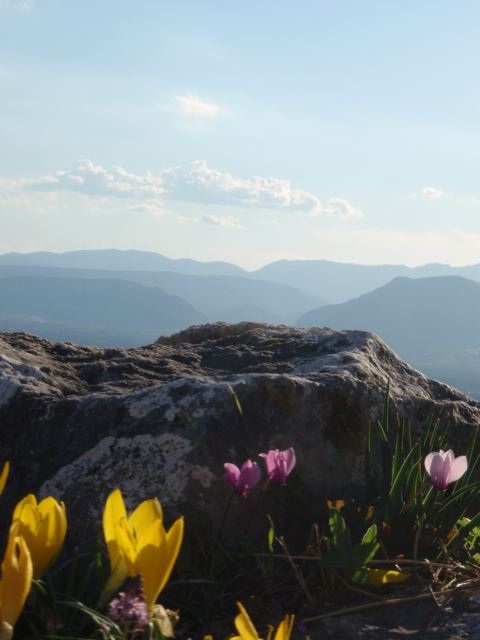 By the way, if you visit Mycenae, be sure to bring a flashlight. The old spring is down a deep, dark stairway, 74 unlighted steps to the bottom. On my morning visit, I’d made it about halfway down before giving up in the Stygian darkness. And I’m glad I did: at the bottom, the steps end suddenly in a short drop into the dry well. It was only three or four feet, but you could seriously hurt yourself at the bottom. In the afternoon, I came back with a flashlight. 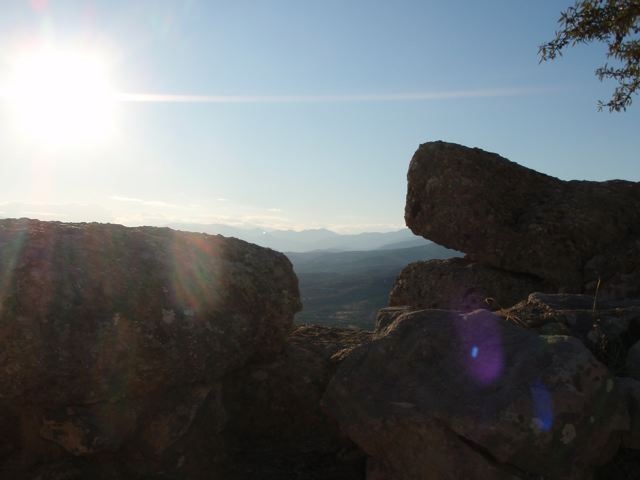 This is a truly spectacular spot. If you come, come early or come late. Or bring lunch and a book, and plan to spend the day. I could happily return. 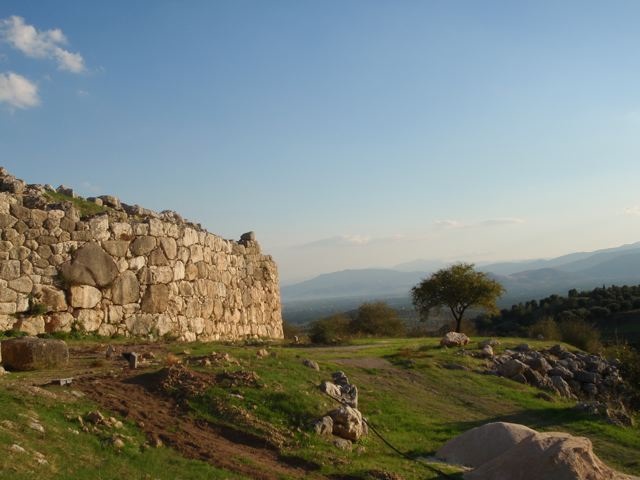 P.S. In a final act of defiance against time, I stood atop the lintel behind the Lion Gate with a silly grin on my face. I had to take my own picture because Christina is not such a scofflaw as I am. 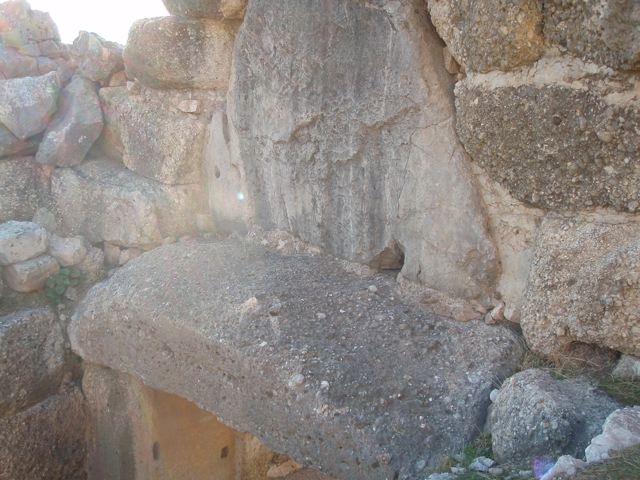 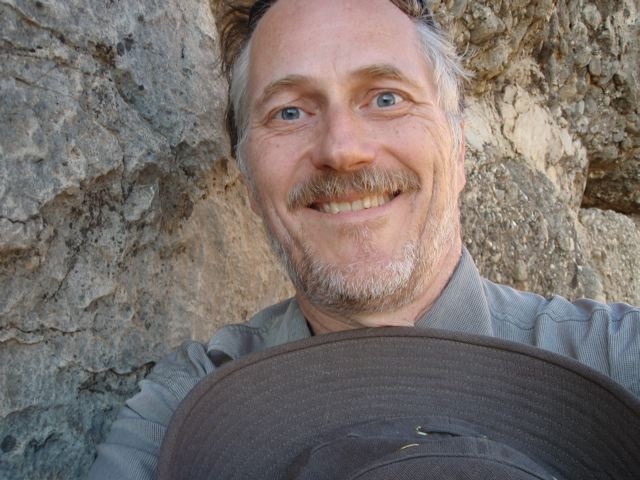 She was willing to take a picture of this happy, tired conqueror of Mycenae on his way out the gate: 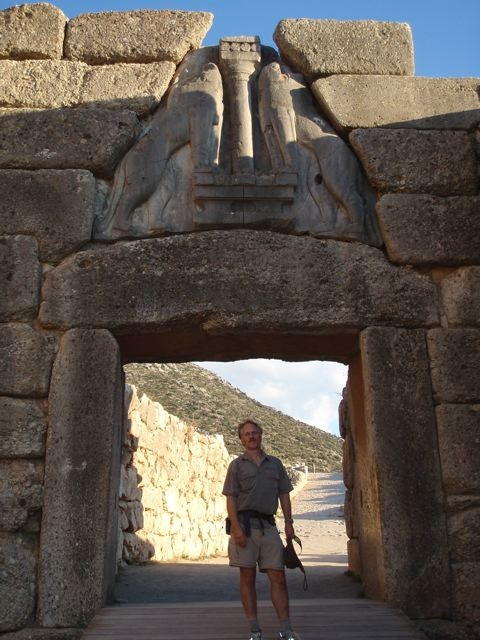